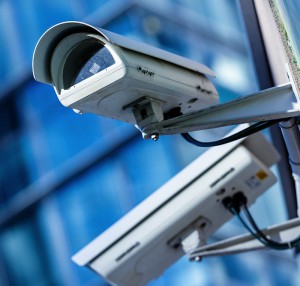 For safety, security and auditing purposes many companies (and homes) require the installation of video camera systems and surveillance equipment.

Modern IP-based video camera systems provide flexible solutions that allow viewing of camera feeds from multiple locations (from outside of the office, on mobile devices, etc.) as well as excellent quality recordings.

We can also help mitigate the cost/benefit of installing surveillance video camera systems by using equipment that has multiple purposes (for example, the recording hardware can function as a high-end backup drive too).

For a demonstration of video surveillance options, contact our office to arrange to view our in-office installation.

What is an IP Video Camera System?

An Internet protocol camera, or IP camera, is a type of digital video camera system commonly employed for surveillance, and which, unlike analog closed circuit television (CCTV) cameras, can send and receive data via a computer network and the Internet. Although most cameras that do this are webcams, the term “IP camera” or “netcam” is usually applied only to those used for surveillance.

There are two kinds of IP cameras:

IP cameras differ from previous generation analog cameras which transmitted video signals as a voltage, instead IP camera images are sent using the transmission and security features of the TCP/IP protocol, which provides numerous benefits:

When you engage any of the IT support services from Fresh Mango in the BVI, you’re in safe hands. Experienced technicians combine with a customer-friendly and can-do attitude to ensure your IT requirements are managed seamlessly.

We can demonstrate an extensive portfolio of projects together with testimonials from our many satisfied customers. We provide a comprehensive set of IT support solutions to meet our client requirements.

Contact us today to find out how our IT support services can help you improve your business. Get a Grip on IT with Fresh Mango!